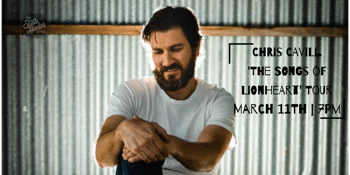 The Stag & Hunter Hotel (Mayfield, NSW)
Friday, 11 March 2022 7:00 pm
41 days away
18 Plus
Blues
Alt Country
Rock
Send this event to
For 4 years, Melbourne singer/songwriter Chris Cavill devoted his world to creating Lionheart; a heart-warming album dedicated to the life of his father who passed away in 2017 following a 28-year battle with Multiple Sclerosis.

The first single and title-track, released in August 2021, received widespread acclaim for its poignant lyricism and heart-wrenching vocals.

Likened to the sounds of David Gray’s White Ladder, Eddie Vedder’s Into The Wild and Tom Petty’s Wildflowers, the album Lionheart presents a rich blend of americana, alt-country and folktronica stylings.

Now following its release in November 2021, Chris is setting forth along the great divide, destined to bring ‘The Songs of Lionheart' to the stage as a means to celebrate his father’s extraordinary life.

Having hand-picked some of the finest and most intimate venues across the country, Chris will be sharing the stories behind these deeply personal songs in a tell-all performance. But he won’t be travelling alone.

Right by his side showing their support will be his beloved family - comprising of his wife and two young boys. After months of repeated lockdowns, the inseparable quartet are packing up the camper trailer in quest to roam freely across the countryside, bringing a story of love, hope and admiration.