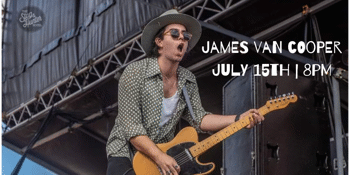 The Stag & Hunter Hotel (Mayfield, NSW)
Friday, 15 July 2022 7:00 PM
16 days away
18 Plus
Rock
Blues
Alt Country
Send this event to
James Van Cooper summons the sound of alt country rock with catchy hooks and twangy guitars. He’s a man for those that like their country gnarly and epic as well as nuanced and intimate. James is a flamboyant performer and a heartfelt songwriter. He’s renowned as a wild and complete guitarist who can leave an audience in smoking ruins.

James as a teenager cut his teeth playing hard and fast on the local rock circuit in his hometown Sydney Australia. In his late teens he struggled with addiction and by 19 years old JVC won his hard-earned sobriety. This road to enlightenment was, in part, harnessed to inspire James’ debut EP released in 2017, “High-rise Skyline”. The making of this EP was guided by Australian Country Music icon Bill Chambers. James and bill met though a chance meeting and for most of 2017 together they recorded and toured Australia and Europe.
By early 2018 James now 21 years of age, was stylistically gravitating more towards alt country and Americana, especially Ryan Adams and Jason Isbell and he began to further blaze his own trail in the world of cool country rock. In March/April 2018 James Van Cooper went to the USA to record his Debut album “Coming Home” with famed LA producer Scott Campbell. While in the US James secured the support of some of LA’s finest musicians including Matt Pynn and Alt Country sweetheart, Jaime Wyatt (Jaime performs a duet on the track Come Home).

James Van Cooper brings his mix of Country, Rock and Blues to The Stag And Hunter for a Friday night to remember, but you’ll forget by the next morning!