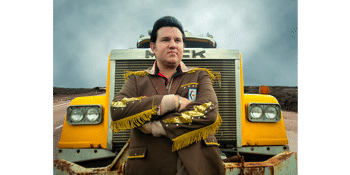 Calling all hep cats and cool rockin’ daddy-o’s, calling all pink ladies and bobby sockers - It’s time to dust off the T-Bird and burn rubber to the malt shop because The Ezra Lee Show is coming at you this autumn as he launches his new long player ‘Cryin’ at The Wheel’.

Your parents might not like it, but Australia’s wild man of boogie-woogie rock ‘n’ roll has been destroying the piano for your excitement for almost a decade now and is recognised worldwide as one of the best young greasers keeping the flame alive.
His career highlights have included opening for Jerry Lee Lewis in Vegas, playing the Sydney Opera house alongside Aussie luminaries James Blundell, Nick Barker, Dave Larkin and Doug Parkinson, and opening for rock n roll pioneer Wanda Jackson on her last Australian tour.

At 14 Ezra joined the legendary Australian pub band Johnny Green’s Blues Cowboys and toured with the band for six years. In 2009 the Melbourne rockabilly label Preston Records released two original albums Out Of The Valley and Ezra’s first full length album, You Can’t Stop A Freight Train engineered by Grahame Thomas and in May 2010 travelled to Barcelona, Spain to perform at the Screamin’ Rockabilly Festival to support Bill Haley’s Original Comets.