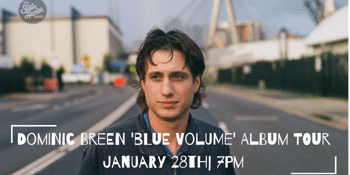 Sydney’s Dominic Breen is thrilled to announce the Blue Volume tour, his first headline tour in support of his recently released debut album of the same name.

Breen’s debut album, Blue Volume, was co-produced with Tim Fitz (Middle Kids) and recorded in 2020 at a significant juncture in both their lives.