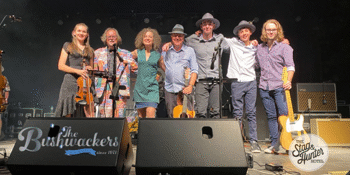 Triple Golden Guitar Winners and 2021 Roll Of Renown Inductees The Bushwackers are currently celebrating the major milestone of 50 years of performance. They performed in Tamworth over January – but only just. Says Roger Corbett “Dobe lives in Melbourne so he was locked down and it was touch and go for a while as to whether we could get him to Tamworth for these very important shows”

The Bushwackers played a sold-out show at the Moonshiners Bar, appeared on the front page of the Northern Daily Leader, performed a medley to close the 2021 Golden Guitar Awards, were inducted into The Roll Of Renown and played in Bicentennial Park on January the 26th to 2000 local Tamworthians.

A great start to the year and The Bushwackers are now looking forward to kicking off their Golden Jubilee year with a big bang at The Way Out West Festival in Winton, QLD  on April the 7th.

Dobe Newton and Roger Corbett bring their combined experience of over 90 years of playing in the Bushwackers with all the songs, stories and history that kind of a journey entails.

“Strangely not all that much has changed over the years” laughs Dobe Newton who has been a member since 1973. “We still bring that energy and enthusiasm to every gig. Our audience has slowed a little but we’re still going as strong as ever and our band has changed a lot since the 70’s with over 105 musicians able to call themselves Bushwackers alumni”

Roger Corbett, who joined the band in 1980, adds “The Bushwackers have so many songs that our fans have grown up with over the last 50 years and 26 albums that they’ve shared with their families and friends. It makes for a very special relationship. We have generations of fans who come along and bring their families to continue the tradition”

The Bushwackers perform an exciting blend of Australian music featuring the Lagerphone of frontman Dobe Newton, Roger Corbett on guitars and the addition of fiddle, bass and drums rounding out the sound. The music is all-Australian with all the stories, humour and sense of history that has helped to forge our national identity.

In 1979 The Bushwackers created ‘The Bushwackers Australian Songbook’ which sold copies all over Australia and the world and is a ‘bible’, a ‘must-have’ for anybody playing  Australian folk music. That volume remains the highest selling book of music in Australian publishing history and is used and treasured today in libraries, schools and collections all around the country. The Bushwackers followed that success with a  second volume and there are plans in 2021 to combine these two books with some newer original material and publish later in the year.

The Bushwackers also recorded the iconic album The Bushwackers Dance Album with a book, an album and instructional cassette that launched the national craze for Bushdancing which is still a staple of the curriculum in many schools. The many Bush Barns around Australia owe their success to The Bushwackers fuelling bush dancing in the early 80’s. The concert at The Hordern Pavilion in 1984 attracted 5000 people, was made into a ‘Big Country ABC documentary these days and can be viewed in full on Youtube.