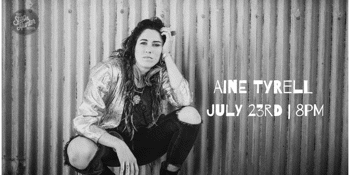 Having lived in so-called Australia for over a decade, Irish born singer-songwriter Áine Tyrrell rewrites what is imaginable every step of the way. She has earned herself the reputation of being an unmissable live act and can be found on stages across the world including Woodford Folk Festival, Shrewsbury Folk Festival (UK), Clonakilty International Guitar Festival (IRE), International Folk Alliance (USA) and many more.

In 2021, Áine was invited to join Irish President, Michael D O’Higgins and his wife Sabine in a ceremony and online tribute to the courage and creativity of Irish women. She has also garnered critical acclaim from national radio outlets in both Ireland and Australia with multiple radio appearances on ABC Radio, RTE Radio, Double J Radio, BBC NI Music and hit number One on Ireland’s national broadcaster RTE’s Independent Music Charts.

Áine recently celebrated the 100th Virtual Cuppa Tea With Me in a 24 hour livestream she then chose to move over to Patreon, and was quickly recognised for her connection to fans and listed as one of the top 10 musical creators on Patreon by the The Australian Newspaper 2021.

Whether she is holding court online, in an intimate room or in front of thousands in a festival tent, it is obvious to all, that the thousands of years of Irish storytelling runs deep in her blood and audiences can’t help but fall in love with her alluring voice and captivating ways.

“Tyrrell's incredible journey is one you'd be well advised to follow.” - The Australian