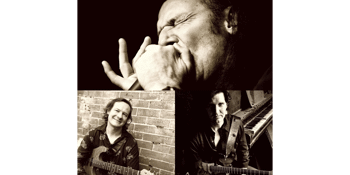 Simon Kinny-Lewis takes the audience with him on a seismic journey of compelling, blues guitar – along with a voice that Steve Lukather (Toto, Michael Jackson), describes as being similar to American blues star Joe Bonamassa.

In the finest of West Coast blues harmonica traditions, Andy Just (USA) has been thrilling audiences internationally with his explosive performances. His sound is extremely powerful, and innovative, which has been honed by many years of playing, and touring. Andy is well known in Europe and Australia where he often entertains thousands at large blues festivals.