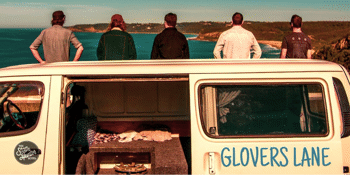 Formed in 2018, ‘Glovers Lane’ is a five-piece band out of Newcastle, Australia. Initially just beginning as friends bringing together musical ideas, ‘Glovers Lane’ soon became an entity of its own. With influences contributed from all members, their sound has been described as a modern take on Motown with elements of rock.

They have so far released five singles, including the catchy, feel-good tune “I Only Know Happiness” which has gained popularity across the country having regular airplay on the ABC program “Australia All Over”.

Their latest release is "Lonely On Your Own", a song born from the distress of repeated inaction from our leaders, and the disparate world view between those in power and the people they represent. Musically it combines ragtime with classic soul records as well as a healthy dose of smokey dive bars.

‘Glovers Lane’ are performing more and more in their home town of Newcastle. With the success of winning the regional final of Passport To Airlie, they look onward to further their performance experience. Each of the five members bring their own musical experience, however ‘Glovers Lane’ has always maintained priority to be about the songwriting.