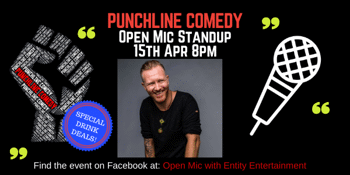 Jarred Keane is an Australian comedian who has performed across Australia, Europe, and the UK. He has been a finalist in the ‘Quest for the Best’, ‘Green Faces’ and ‘5 Minutes of Funny’ comedy competitions. In addition, he has produced and starred in shows for the 2009, 2010 and 2012 Melbourne International Comedy Festivals, as well as the 2012 Sydney Comedy Festival and 2018 and 2019 Sydney Fringe Festivals.

In 2010 Jarred Co-Created and hosted the weekly comedy podcast Stage Fright. In 2011 he created the production company Riot House which operated a free weekly showcase of new and established talent before a relocation to Europe, where he took over regular hosting duties at Charlie Wright’s Comedy club in London. Returning to Sydney in 2015 Riot House was re-vamped in a new home for a limited run of monthly shows, and then again with greater force in 2018.
Riot House Comedy now operates every Tuesdays in Alexandria, Sydney.

Jarred has a fierce, but tongue-in-cheek, stage presence, and is as comfortable when talking about world events as he is mocking his own emotions or bodily fluids.