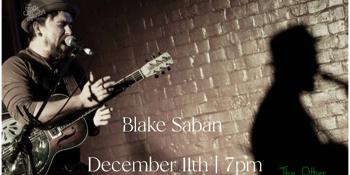 Blake Saban is the front man and creative force behind one of the hardest working roots rock bands in Australia, The Urban Chiefs.

As a solo artist, Blake brings a smorgasbord of sound to the stage. His signature whisky sour vocals complement tales of his life and experiences thus far, underpinned by bluesy slide guitar, psychedelic pedal effects, and the simplicity and beauty of his acoustic guitar.

Blake’s song writing talents, along with his versatile guitar skills and powerful vocal range, have seen the band named in the top 5 Blues and Roots Artists at the 2013 MUSICOZ Australian Independent Music Awards.

With four studio albums with The Urban Chiefs, along with several solo EPs, under his belt, Blake has plenty to sing about. He is an exciting, adaptable and experienced entertainer not to be missed!