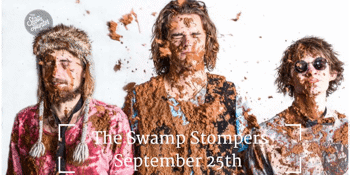 The Swamp Stompers play funky rock and blues with heavy grooves. Emerging from the dirty backwaters of NSW, the band sounds like the musical lovechild of John Butler Trio, Led Zeppelin, and Red Hot Chili Peppers, with catchy guitar riffs and didgeridoo soundscapes setting this original blues-rock trio apart from the pack.

The Swamp Stompers have been stomping their mark on prominent Australian festivals since 2012, including recent stand out performances at Blues on Broadbeach (QLD) and Queenscliff Music Festival (VIC). The band is renowned for their incredibly high-energy live shows, with punters and peers left in complete awe by their raw power and finesse.

After over 9 years together, The Swamp Stompers will be breaking up. An Australian farewell tour will take place from September to November 2021 to coincide with their highly anticipated debut album release. A European farewell tour is planned for May 2022, completing the final jewel in the touring crown for one of Australia’s most popular young blues-rock bands.