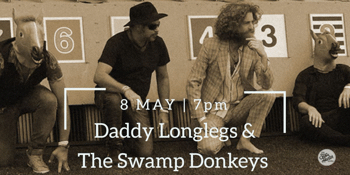 Coomba
The Stag & Hunter Hotel (Mayfield, NSW)
Saturday, 8 May 2021 7:00 pm
14 days away
18 Plus
Blues
Send this event to
Hot on the hooves of their recent debut single ‘Salty Sea Dog’ (as heard on Double J), the inimitable DADDY LONGLEGS & THE SWAMP DONKEYS are celebrating their debut EP ‘Gut Butter’ with a show at Stag & Hunter on Sat 8th May alongside the other-worldly COOMBA.

DLSD are led by the howling, leg-swinging, auburn vagabond known as Daddy Longlegs (aka Aaron Houston). He can be heard growling his ‘Gut Butter Blues’ throughout the urban forest, stepping in sync together with his loyal Swamp Donkeys Felix Akurangi (Bass), Jay McKay (Harmonica) and Steve de Wilde (Drums).

Their journey so far has taken them to various festivals and venues throughout the distant corners of Australia, winning the Perisher Peak Festival competition for undiscovered treasure and sold out performances at the Manly Fig, The Shack along with their recent shows as part of The Great Southern Nights Series and festival appearances at Illawarra Folk Festival, Love Culburra Festival and Manly Jazz Festival.

COOMBA has teamed up with multi instrumentalist Ren Stone on Bass, World music drummer Tim Bradley on Kit and Egyptian/Australian percussionist Youssef Sawires on Darabuka/Tabla in a new project bringing the old world sonic architecture of Near East thought and Aryavarta musical philosophies into the stylings of modern culture.

Coomba has performed around Australia at festivals and venues over the last 25yrs in such bands as Extended Family, Marshall & the Fro, Brass Knuckles, Sehsekhoi etc.