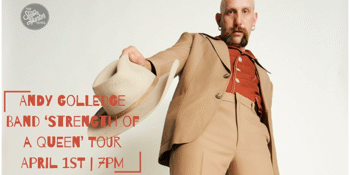 The Stag & Hunter Hotel (Mayfield, NSW)
Friday, 1 April 2022 7:00 PM
62 days away
18 Plus
Rock
Alt Country
Alternative
Send this event to
Sydney alt-country rocker Andy Golledge has announced a banger of a tour across Australia in March/April 2022 which will follow the release of his debut album ‘Strength of a Queen’. This tour is set to be a wild and stimulating experience, and much like all of Golledge’s live shows, you can expect it to be exhilarating and unpredictable.

If you are going to discover one thing this year, make sure it’s Andy Golledge.