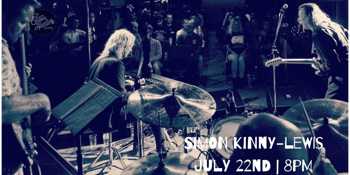 The Stag & Hunter Hotel (Mayfield, NSW)
Friday, 22 July 2022 7:00 pm
23 days away
18 Plus
Blues
Send this event to
Australian Blues Guitar phenom SIMON KINNY-LEWIS has performed/recorded with the cream of the blues crop including Robben Ford, Chris Cain, Josh Smith, Kirk Fletcher and many more. Not only recognised as a virtuoso guitarist but also as an impressive singer and songwriter, Simon’s approach has been described as a musical intersection in which tradition, modern tendencies and personal style are enriched by pure emotional release.

“A great accomplishment for both Robben Ford and Simon Kinny-Lewis”

Absolutely wonderful playing, you can hear the smiles on their faces as they bust through this set. Great on all fronts. - Josh Smith - leading US blues guitarist

Simon has a great command on the guitar and vocals along with wonderful songs, teaming up with my friend Robben Ford to make a great, contemporary blues record.” - Kirk Fletcher - leading US blues guitarist.